After what has felt like the mildest and driest autumn ever, winter has finally hit with most of May's rain falling in the last few days of the month, and with it a big drop in temperature!  It feels cold here, but I think its just its been so warm and we just haven't had a chance to acclimatize yet.  Livestock farmers notice it more than others perhaps, as we still have to tend to our stock no matter what the weather (vegetables can be abandoned for a day or two and not suffer much!).


Our garden is going great, and we have now reached self sufficiency in vegetables.  We have onions, pumpkins, potatoes, garlic, dried basil and paprika stored away, along with many pickles and jams.  Plus the garden just keep pumping out loads of food.  Now we are enjoying beetroot, sweedes, carrots, cabbages, broccoli, cauliflower, kale and bok choi (and still the odd capsicums - do these plants ever stop!!!) fresh from the garden.  Our chooks aren't laying much at the moment, but the goats are still making enough milk for our fresh use and the odd cheese (but not enough to make cheese every day).  In the polytunnel I'm planting peas and lettuce and I'm getting ready to plant onions.  Our garlic is all up and we have also planted shallots.

We are also preparing new blocks of growing beds for spring planting as we are expanding out garden a little more. Either with the view of moving into growing for market or to supply our animal feed (an area that we still depend entirely on bough supplementary feed).

The great pumpkin harvest of 2017

There are a few things that really make it feel like autumn, and one of them is pumpkins!

We have just finished getting all our pumpkins out of the garden and into storage in our 'cellar'.  And what a haul we have had.  I haven't weighed them all but there is plenty more than we need which is great!

So my plan is to play around with adding pumpkin to more of our food, like the sourdough bread I bake every second day.  Also things like pancakes and pikelets, fruit cakes, scones and I may even manage the American pumpkin pie.
Posted by Sharon at 11:33 PM 1 comment:

that moment, when you realise you are living your dream....

Ever since I was a teenager, in the mid 90s, obsessed with Earth Garden magazine, I would dream of 'one day' having a place in the bush, building a house, having milking goats and chooks and living self sufficiently growing all my own food etc etc.  I used to draw designs of my hand built mudbrick house and all the animals I would have  (at least one of EVERY farm animal that there is!).

Funnily enough, as I was rushing back in from locking up the goats in the dark, to get back to read the kids their bed time stories it clicked for perhaps the first time, that this is as close to living one's dream as it gets.  We have been eating meals made pretty much entirely from our own produce for weeks now.  I'm preserving lots of weird and wonderful pickles, cooking tomatoe sauce, making sweet chilli sauce, and contemplating the storage options for what looks to be a bumper pumpkin harvest.  I've made more cheese than I care to think of, and seem to have to bake more bread than I sometimes feel like (the romantic notion of cooking on the wood stove isn't so romantic on a hot day, and far too sweaty!!).

Perhaps I didn't realise I was living my dream, because while it might all sound idyllic and all that, its SO MUCH WORK.  I love it don't get me wrong, but I just don't get alot of time to contemplate or think about these things, I am usually thinking about the next thing that I can get done.  And then there is the sleep deprivation (our one year old has very quickly turned into the WORST sleeper in our family by far, yawn...), the late nights preserving and baking and washing up (not so idyllic).

So while its not all perfect and there are so many jobs we want to get done, I also feel that I am as close to my 'dream' as I 'need' to be.  We have achieved so much, and its so truly satisfying to eat meals made from all our own produce and to sell some too.  A few more weeks and it will be mostly over, everything will be 'in' and either stored in its natural state or will have been cooked, dried or something else, and then perhaps there will be that elusive relaxing day by the fire in winter reading or spinning wool or something, ha!
Posted by Sharon at 3:40 PM No comments:

Hey there!
Our garden is growing great this year, and we have had our first tomatoe.  (Obviously grown in the polytunnel, a bit early for out side tomatoes around these parts! 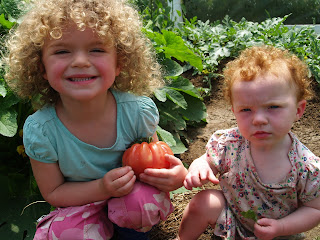 Many hours have been spent working the garden this spring/summer, and alot of money spent in irrigation.


Hoping you, dear reader, have had a lovely holiday season, celebrating in what ever way suits you.  For us its such a busy time of year, we mostly focus on catching up with family.  And now its to look forward to what 2017 will bring for us.

Since I have been pretty slack updating this blog, here are some more pictures of our baby goats, they are growing up so fast!


Our chickens are also growing up, and with some luck there will be ducklings next month.

We have been adding more beds, more irrigation etc to our garden, here is the progress, with tomatoe beds in the background - 58 plants all individually drip irrigated.  3 beds of 8 plants, in the process of being set up for capsicum and chilli.  To the right of these are 8 beds of potatoe, which are growing well, these are irrigated with impact sprinklers. 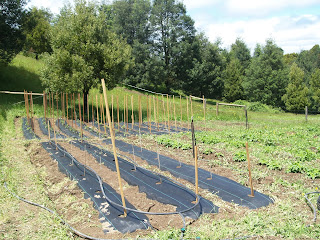 Hello there!  I think every blog update in the last few years has begun the same way, with an apology!  But here I go, I am sorry for not updating our blog for AGES!

So, now that we have that out of the way, what has been happening on the farm since I last updated.

We have had goat babies.  Two sets of twins,of which three are girls (our first girls, which is great as we will eventually be able to milk them).  They are very cute!  So now we are getting plenty of milk and I'm getting back into making cheese, and other dairy delights like cajeta (a mexican goat's milk caramel which is very good).  I like making fetta, soft ricotta type cheese for cheesecakes and haloumi.  But I want to experiment a bit more this year and try some other types.


First chickens have hatched, about 9-10 (its hard to count chickens!).  We have a naked-neck rooster, and these are all his chicks, a mix of fully feathered and naked necked chicks.  Our son who loves all the more 'ugly' creatures is very happy, our daughter who loves the classic 'cute and furries' thinks they are ugly! I actually just think some of them look ridiculous, but as long as they lay eggs, I don't overly care what they look like!

The garden has been taking up most of our weekends at the moment, and much of my weekdays too.  We are being all professional this year, and we are setting up irrigation and even using weed matting for our tomatoes, capsicum and chilli.  We are using both impact sprinklers and drippers and it is quite fun setting it up, although lots of work (and time - everything takes so much time!).  About half the summer garden is planted now.

At this point in time the rains are still falling (an improvement on last year, when at this time it was very hot and dry), so things are looking good for a great growing season ahead.  Our polytunnel is growing great, and we have tomatoes, cucumbers, zuchinni, watermelon, capsicum and chilli all growing, as well as bananas, citrus, strawberries and passionfruit.  When the sun is out it easily gets up to 30-35C, so all the heat loving plants are pretty happy!

Hello There!
Its hard to believe nearly a whole year has passed since I last updated this blog, sincere apologies if you check in here every now and then.  This last year has simply flown by in a flurry of business, the likes of which I could not possibly imagine!  Fingers crossed that the next year will be slower and easier, but that's not likely, although I live in hope....

So one major reason for my absence is the arrival of our fourth child, another girl, who arrived here on the farm on christmas evening. She has settled in fine, but sure has taken up a chunk of time.

My vegetable garden was a mixture of success and failures, but as I tell my kids we learn a lot more from failure than success, so I am sure learning lots!  Our biggest issue here has been water, so this year we installed a 115,000L water tank, which is now 2/3 full.  That should make keeping the garden alive easier, especially since we have also gone high tech and bought a pump and sprinklers!  My days of watering by watering can are OVER!  My other major issue has been rabbits.... and while we have STARTED on a fence it wont be finished in time for this year's garden, so I'm not going to bother planting crops that they eat, like peas and bean, and grain crops.

Our polytunnel is now officially finished, with doors, sprinklers and lots of plants (including bananas, coffee plants, lemon grass and a few other warmer climate plants.  They like the more balmy conditions inside the tunnel, although the snow we had still made it a little chilly for them, hope they can hang in there a little longer, as spring is just around the corner (the wattles are starting to flower and so are the daffodils/jonquils).

We have caught the mushroom bug, after doing a short workshop at our local community garden.  We did one shitake mushroom log as part of the workshop, but have since bought dowels to do some other logs here.  Its a fun (but time consuming) process and the kids helped out too (despite them all LOATHING mushrooms - luckily I have mushroom eating in my genes and can cope with a glut!).

Our eldest daughter has gotten into duck keeping, and now cares for our expanded flock of ducks (we hatched some ducklings late last year - born on christmas day too...).

Our goats are milking OK, but in the process of drying off in readiness for kidding (fingers crossed) in spring.  They aren't too impressed with the winter grass (or lack of grass), so its quite a chunk of my time devoted to trying the coax them to eat - and yes everyone thinks goats will eat anything, but they are such picky eaters....

So there you go, a snapshot of the last year.  Hopefully I will get around to updating this blog more regularly again, wish me luck!

You can follow in more detail progress on our house here.